Women in Mzansi have no choice but to pay for having their periods, yet the rich and big companies can afford to hide billions of rands from SARS. In 2012 alone, companies in South Africa hid over $29 billion overseas to avoid paying tax. That’s 1300 Nkandla security upgrades, to be exact [1]. Let’s stop imagining what this money could do for us and demand it starts working for us. Add your name to this campaign to stop those who say to our government "Tax me if you can".

400,000 families, who could have moved into RDP houses in 2012, continue to live in shacks and overcrowded dwellings. 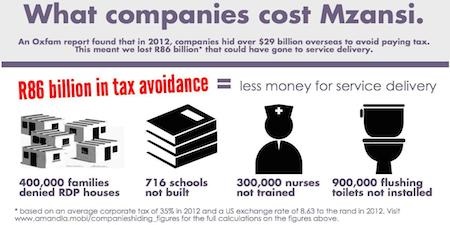 Illicit financial outflows from Sub-Saharan Africa ranged between 5.3 percent to 9.9 percent of total trade in 2014, a ratio higher than any other geographic region studied [2]. They start at the domestic level and should be studied from the point of view of stakeholders in subsidiaries, and when profits are shifted from subsidiaries out of the country, the effect on wages is bigger than the effect on tax revenues [3].

If we’re going to tackle inequality, we need a tax system that isn’t rigged to punish the poor. All of us who live in Mzansi pay tax and are contributing towards service delivery, including every time we buy sanitary pads, condoms or airtime we pay tax through VAT. In fact, in the 2014/15 financial year, the biggest source of tax revenue came from individuals, through salary tax and VAT. We are paying double the amount corporates pay. This means you and I are essentially subsidising corporate profits while earning peanuts.

The amandla .mobi community together with many civil society groups in Mzansi have already started mobilizing on this issue. We need 10 000 signatures to make enough noise for President Zuma and Finance Minister Gigaba to hear us.

We call on you to act now to stop big companies and the rich from hiding their profits overseas. We support efforts to put in law mandatory country-by-country reporting by multi-nationals up to the project level. This will force companies to report on their profits and earnings even in other countries. Governments should be able to exchange financial information freely and encourage cooperation and compliance between tax administrators. There should be no excuse for tax avoidance.